On her maiden cruise around Vancouver Island 4 months after purchase in 2004. Note the squared off transom from the IOR “upgrade” in 74′.

November of 04′, Carmanah arrives at our home on a self loading 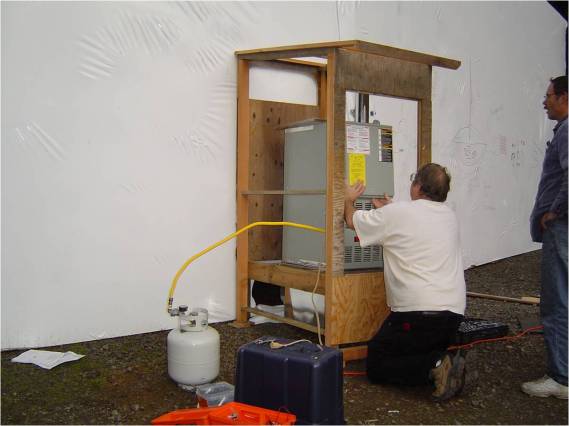 truck for the start of the make-over. 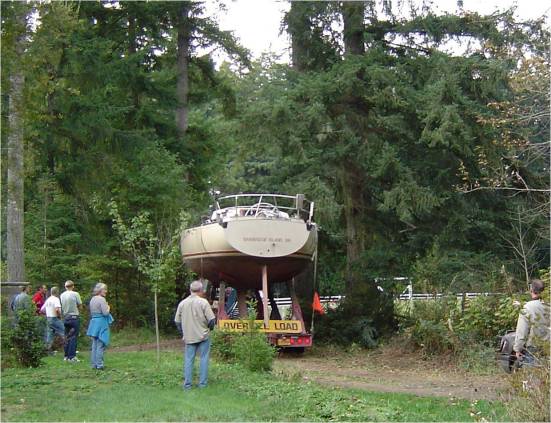 2 hours to carefully back the boat up our driveway

Mike and I used weed burners on the Dr Shrink plastic to get a super tight fit–both inner and outer layer for double wall. really helped for retaining head and no drips from condensation. 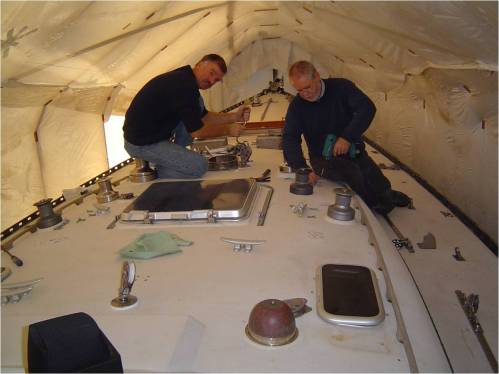 Mike & Mike stripping hardware and the winch farm on deck. The molded winch platforms on the cabin were then cut off flush which left 8 large holes in the cabin top.

We cut a section of transom out for pass through and built a mold for the layup of the scoop out of door-skin. 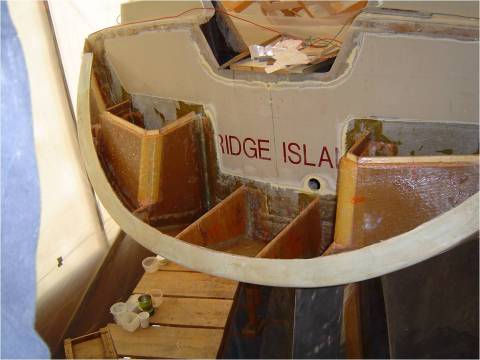 After the fiberglass layup (1 cloth then alt. matt/roving w iso polyester resin) and with glassed in stringers and structural transom lockers.

Transom after popping the mold off. A 3/8″ deep X 4″ wide recess in both new layup and adjoining original hull allowed an 8″ connector layup for added strength.

After spraying the metalic silver awlgrip, re-establishing the waterline. The boat had massive amounts of micro-balloon fairing added in 1974 to rate better w/IOR so original marks are buried.

We added Tek-Dek to the cockpit which is plastic but looks like teak.  So nice to be working “indoors”.

And other niceties like an instrument arch over the companionway.

Most of the exterior teak was replaced with stainless steel except the cock pit comings and dorades became Honduras mahogany with epoxy and varnish finish.

We salvaged some yellow cedar off the beach which we re-sawed for finishing the interior. 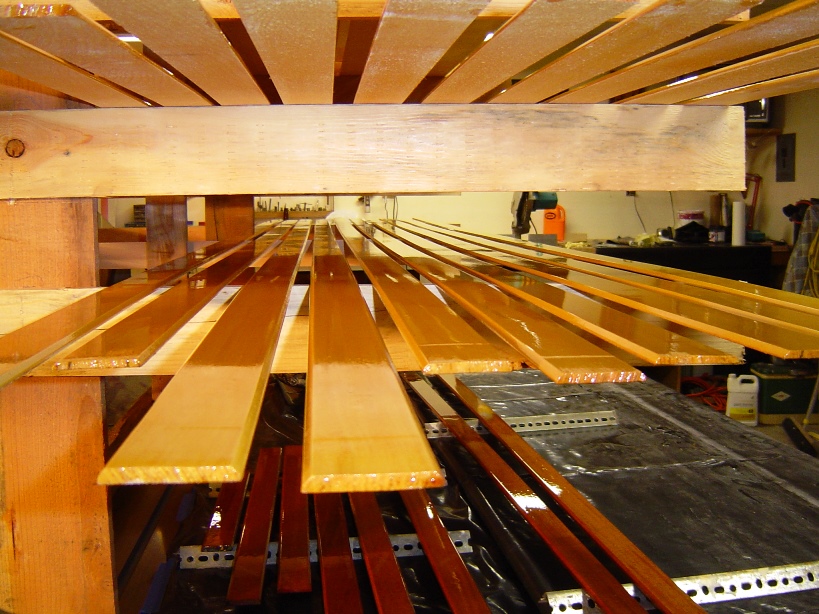 Mass pre-finishing of the ceilings to be installed overhead’ 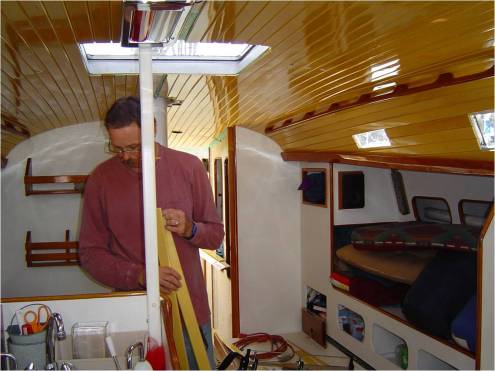 The beveled cedar strips covered the reconstruction of the overhead nicely.

The old wiring from the 70s had to go. New Blue Seas Panel and tinned copper wire was run through out the boat which took a whole lot longer than anticipated.

11 months and 20 days after coming home, Carmanah is heading back to the sea. We had a thing about keeping it to less than a year. 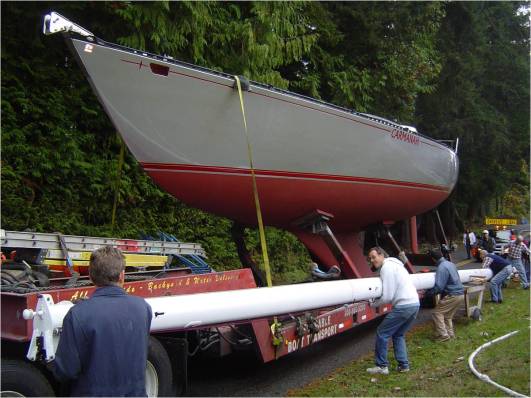 It took a lot of helping hands to lift the mast back on the truck once it negotiated our long narrow driveway. Pretty heavy stick.

After a couple seasons cruising the “new boat”, we decided that the old Westerbeke engine with remote hydraulic drive was not for us for our long term cruising plans so we installed a new Yanmar 4JHAE. We set the engine inplace on new beds while still in the slip then sailed to Port Townsend to finish the installation on the hard.  Took most of the winter so had to sail in/out of the slip for the Wed. races.

Since the old hydraulic drive was mounted forward of the engine, we had to cut a slot for the new shaft log. Luckily we were able to reuse the old shaft and strut in their new location.

The new holding tank is epoxy/fiberglass with a plywood core. 30 gallons.

The upper berths on either side of the salon were removed to give more sit room (settees are now 5 inches deeper) and added storage.

The new cubbies behind the settee seats hold a tremendous amount of stuff. 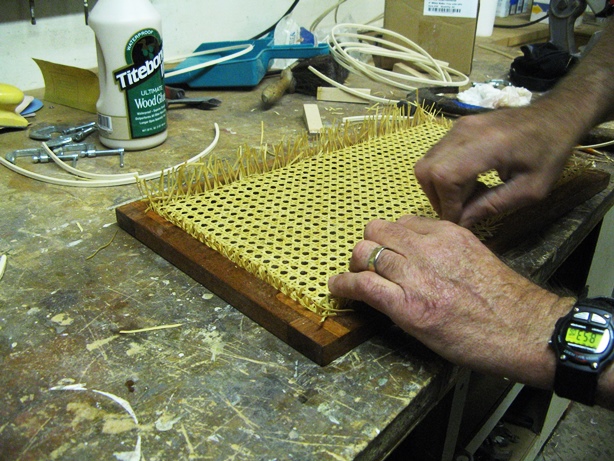 All the new cabinet doors were done with wicker in sepele frames. We love the look and the air flow. 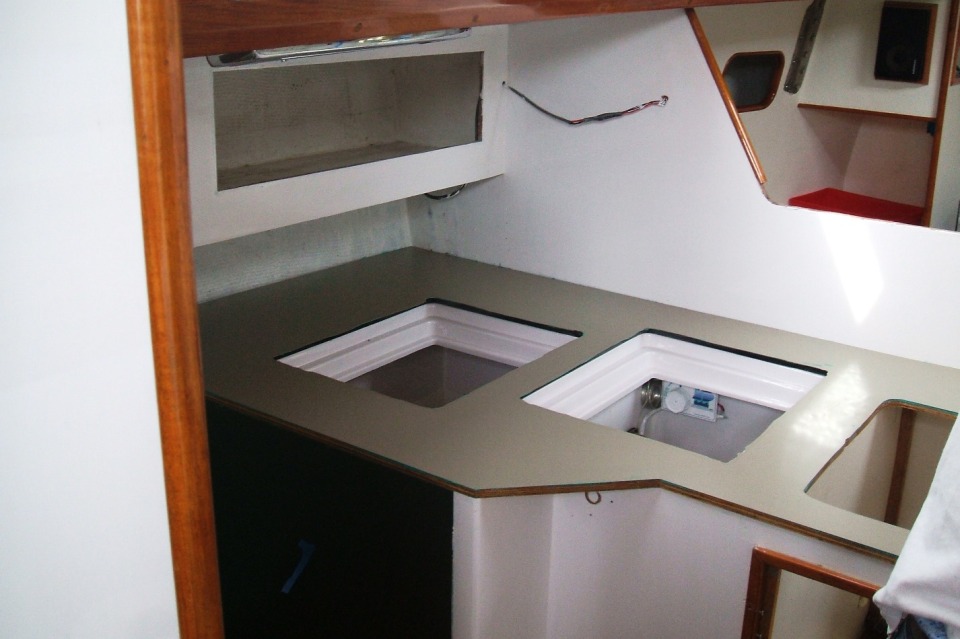 The new refridgerator became smaller inside as we added 4″ of foam insulation and vacuum panel lids, uses much less power now. 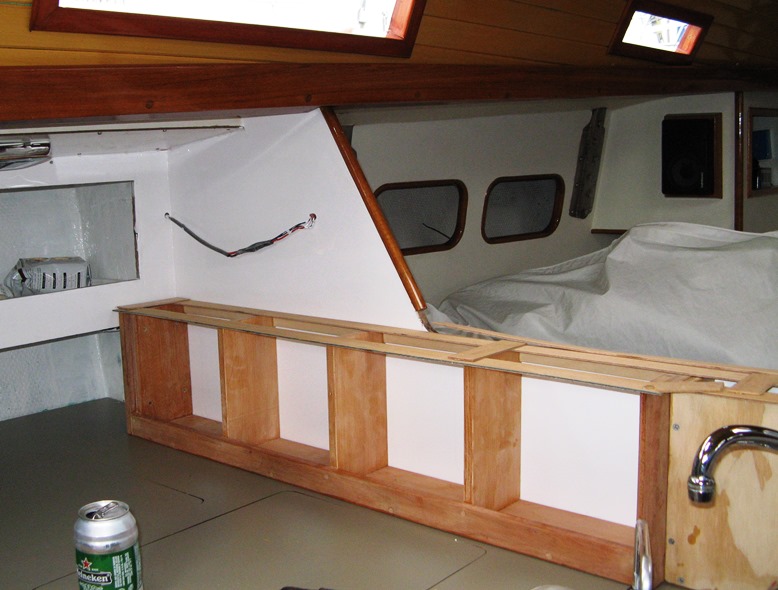 We had enough “Hondo” to build Donna’s counter cubbies out of solid stock. 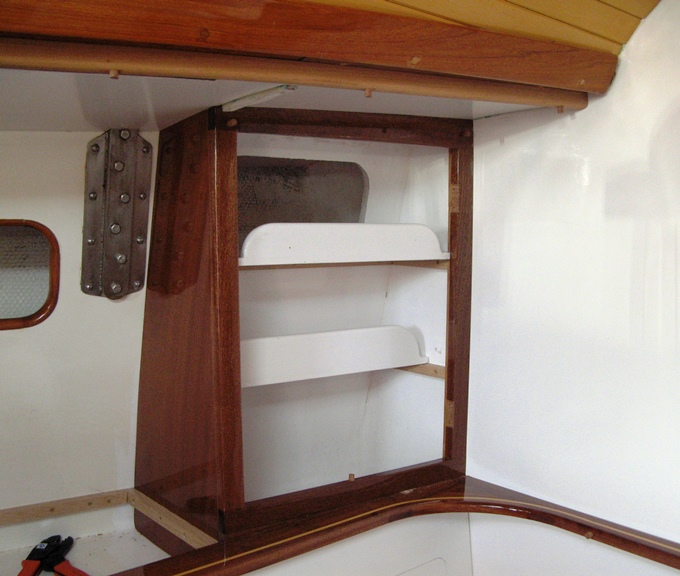 Cabinets in place of old berths were African Sapele en lieu of Honduras Mahogany which is our favorite but becoming hard to find.

We really got into inlaying contrasting woods in the salon.

We took part of the funny aft settee for drawers and the “Treasure Chest” as Donna named it.

New lid for the chart table with some inlay work 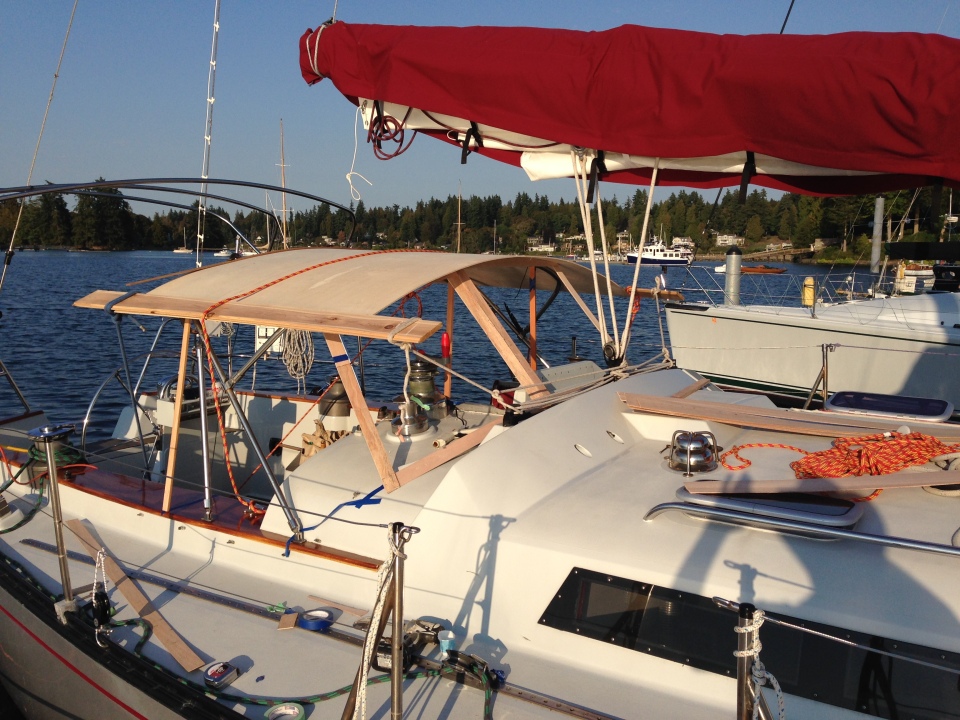 Beginning the mold for the dodger top. 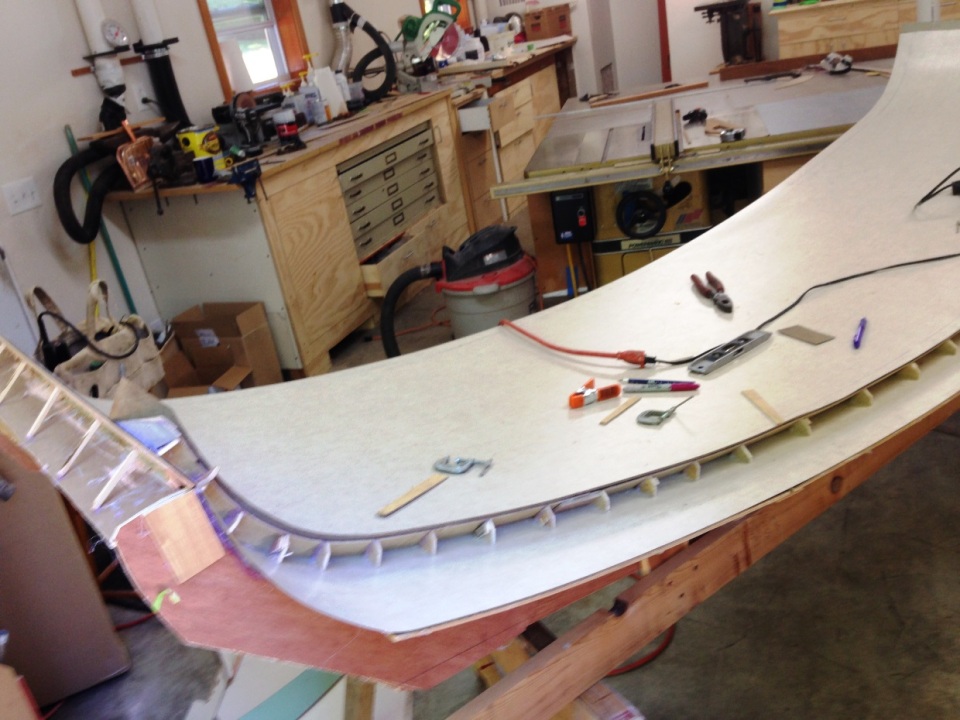 Finishing the mould for one of the bimini sections in the shop. Fiberglass with polyester resin will be layed up in the mold to make the bimini

Donna popping the newly laid up dodger roof out of the mold. Came out pretty sweet. 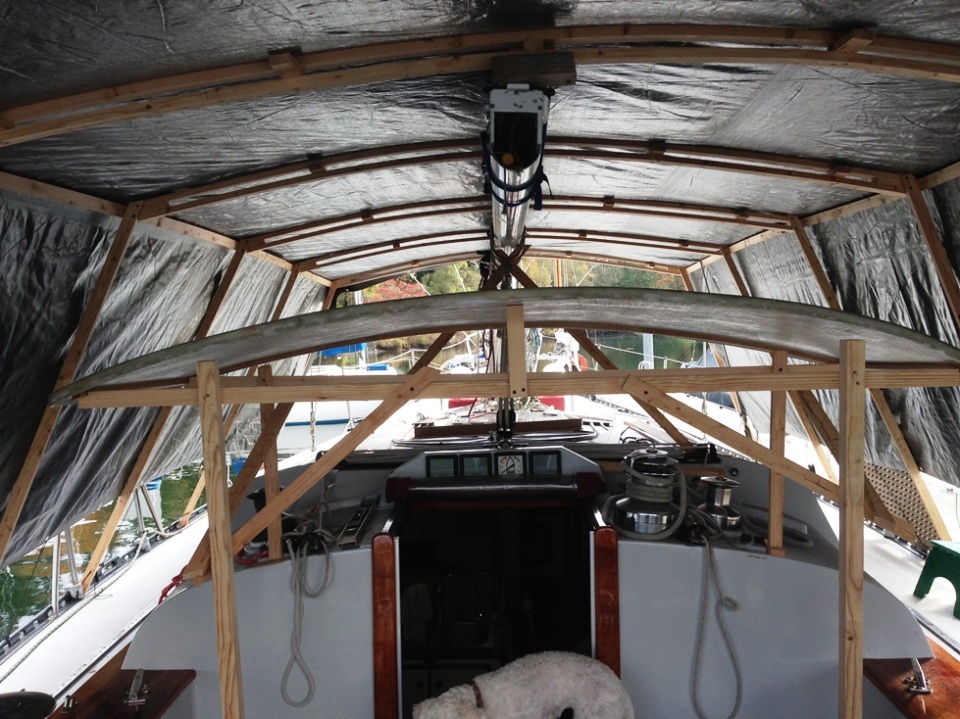 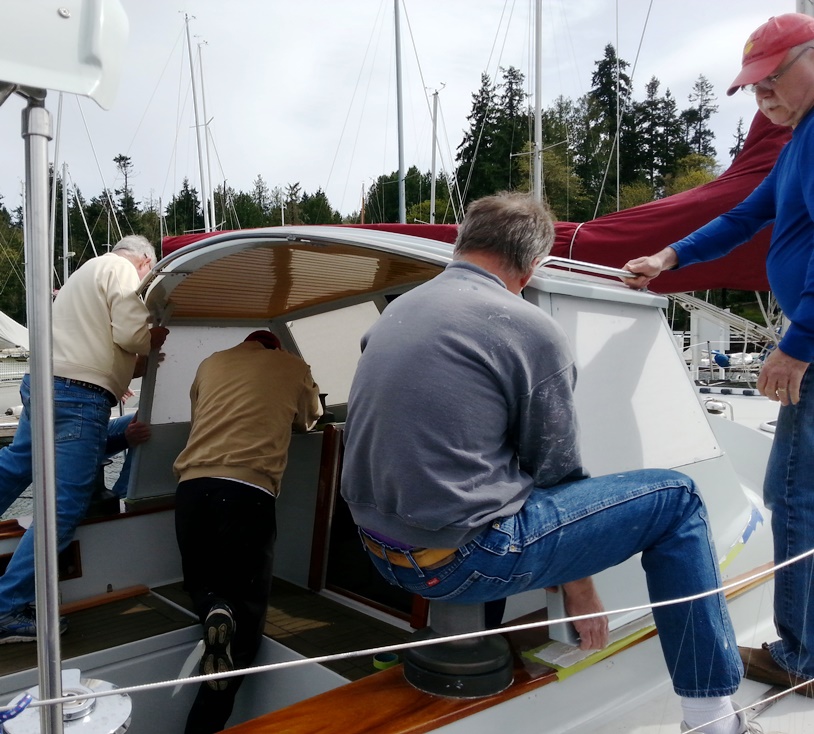 On mounting day, we got the gang together to set the dodger in place and attach,

All installed, looks OK. What a difference in weather.

1 thought on “Carmanah Make Over”