It was pretty much pitch black when we finally pulled into Bahia Frailes.  Our vow to motor as little as possible mostly adhered to today as we sailed down the Baja Coast from Bahia de Los Muertos with our biggest headsail, “Old Whitie”.  Arriving after dark is the toll you sometimes pay for sailing more and motoring less.  Lucy however was very concerned about her shore leave status once we got the anchor down.  None of us could see the shore but we could hear the surf.  Frailes is just close enough to the southern tip of the Baja peninsula to get swells wrapping around from the open Pacific.  I launched the paddle board and she jumped right on with her doggie life jacket and glow stick so we figured she was game to give it a go.  It didn’t take much paddling before a wave grabbed us and we were flying toward the beach.  Ahh, the thrill of riding a wave in total darkness.  We might have actually made ashore relatively unscathed had Lucy not decided to bail on the whole program– jumped overboard –I guess she figured that it was safer in the cauldron of churning white water than riding on the board with me.  Actually, her reasoning probably isn’t far off the mark.  Anyway, I was able to reach over and grab the handle on her doggie lifejacket and drag dog and paddleboard ashore.  Lucy was really happy.  It’s a sweet stretch of sandy beach there and she had a great romp but when it was time to head back out to the boat, Lucy was quite unwilling to get onboard the paddle board.  Finally, she sprinted down the beach and leaped on the board just as we had a good lull in the wave pattern.  It was the right call on her part, we made it back out through the invisible breakers with out mishap.  Hot showers for us both and a good night’s sleep before our departure the next morning for San Blas on the mainland coast.  More great sailing with up to 18 knots of wind on the beam.  We made it in 42 hours, arriving at dawn after the 2nd night at sea.  Not bad.

After tying up at the marina, we discovered that our refrigeration had crapped out.  Not our first equipment challenge of the season.  In October, up north in San Carlos, as we were recommissioning the boat for the season, we discovered a crapped-out battery charger/inverter.  Luckily, we still had use of our van and were able to drive back to the US to pick up a new one we had shipped to Arizona.  Not so lucky with the refrigeration repair since we’re much further from the border.  We heard that shipping to Mexico is unpredictable, unreliable and very expensive.  The expensive part proved to be quite true but we were able to ship parts down in about 4 days.  First the parts we didn’t need (bad advice from factory tech).  Then the right part after the local refrigeration guy in La Cruz checked it out.  Hopefully he’ll reinstall the unit tomorrow and we’ll be able to head on down the coast.  Barra de Navidad for Christmas is looking like a good possibility.  Mechanical issues aside, we’ve had a great fall sailing down the Baja.  We’ve been able to hit most of our favorite anchorages and cross paths with many of our sailing friends.  It really is a tight knit community of cruisers here even though everyone is often spread over many hundreds of miles of coast.  But we just keep crossing paths with various boats and enjoying the time together.

We got Carmanah all sanded, bottom painted and ready to launch in record time. We had to work with head lamps in the wee hours though as the October day time temperatures in the boat yard got hot as soon as the sun broke the horizon.. Once in the water all was good though.

We hunkered down in the small mining town of Santa Rosalia for almost a week as the strong north winds blew. There we even white caps in the harbor.

The local Rotary Club in Santa Rosalia is built out of fir from the NW as is the whole town. In the 1800s they shipped copper ore to Tacoma and the ships returned with logs for ballast.

A “two margarita lunch” in Mulege with Pat & Celine of Voila.

Donna steering us down the Baja coast on a lazy spinnaker run.

Lucy is completely exhausted after working the spinnaker all day getting to San Juanico.

The moon rise from the anchorage in San Juanico–Baja.

The Agua Verde anchorage just south of Loreto, Baja Sur. Easy to get to by boat. Not so with a car. 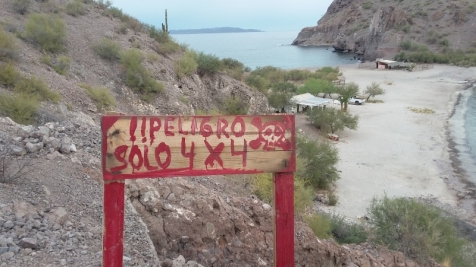 If we ever car camp in Mexico, Aqua Verde would be a choice stop—roads are pretty good….except for the last 100 yards. What a cool spot though.

Carmanah’s call for an afternoon bocce ball game on the beach brought some boaters ashore at Aquaverde.

An inland hike from the Mengles de Solo anchorage on San Jose Island with friends. The trail is a 30′ wide super highway to the interior of the island.

Vanna our wind vane steered for two days and nights flawlessly (almost) when we crossed over from Bahia Frailes near the south cape of Baja to San Blas on the mainland. Look how smooth it is. Pretty sweet.

Dinner at Coquie’s in La Cruz with friends from Ahelani and White Raven. Rick & Suzie had guests Bob & Beth also from the Olympia Yacht Club as well as their son Jake aboard White Raven for the week. Another great meal in Mexico.

Merry Christmas everyone. The central plaza in San Blas just getting ready to gear up for Christmas. In two weeks it’ll be completely decked out