Ocean Falls was pretty much our northern turn around point for summer cruising.  That far north, we were lucky to miss a lot of the smoke from forest fires that persisted in Puget Sound up through Desolation Sound and to Port Hardy.  We were lucky to have mom on the boat for 8 weeks and dad for about 10.  Linda joined us for a week hopping aboard in Bella Bella and cruised down to Port McNeil on Vancouver Island to fly home with mom to San Jose.  After dropping dad back a Bainbridge Island, we regrouped then headed back up to the San Juans for a fall cruise that was very nice and civilized.  By late September most of the anchorages were sparsely occupied and the weather was pretty nice.  But as the temperatures began dropping into the 40s, we felt the pull of getting back to Carmanah for more Mexican cruising.  So the month of October was basically spent cleaning up Restless for winter and preparing Carmanah for the tropical cruising season.

The shell beach at Fury Cove just north of Cape Caution is irresistible on a sunny day. We had a little picnic with mom & dad & Linda.

Poor Lucy got a nasty cut on her nose while burying a treasure on a shell beach. Don of Windwalker fashioned this cone our to an old wine box. Didn’t work at all. 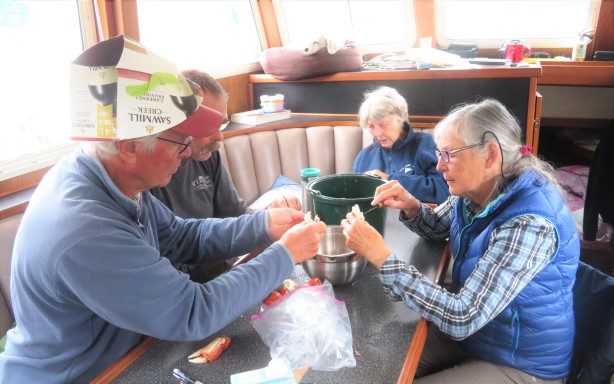 Everyone is very focused drudgery of picking crab. Its’s difficult for me to resist just eating the meat instead of putting it in the bowl. Note Don is now wearing Lucy’s cone. Better hat than dog cone.

Sullivan Bay in the Broughtons is a 100% floating town complete with driving range. Closest to the flag gets free moorage for the night. We didn’t win but Linda is in good form going for the money shot here.

Donna got this shot of me & Lucy with dad & Linda after a grueling hike in the Birdwell Group–in the Broughtons.

The native village at Alert Bay on Cormorant Island near Port McNeil has many interensting features like this look out honoring the Raven Clan, one of many along the waterfront. We traveled over on the ferry to see the U’mista Cultural Centre opened in 1980 to house potlatch artifacts previously seized by the Canadian government. It was spectacular but no photos allowed. 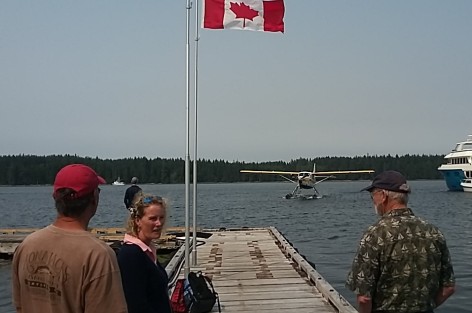 Waiting for the plane at Port McNeil to take Linda and Mom home. The fire made it touch and go for getting south through the smoke. They did finally get out several hours late. 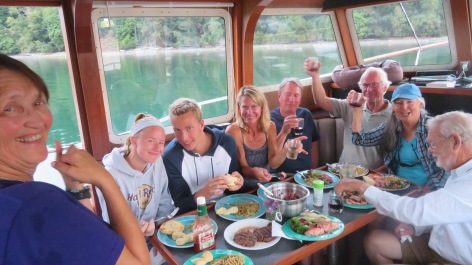 A great seafood dinner of planked salmon and dungeness crab aboard Restless at Denman Island with the crews of Wild Horses and Windwalker. Hated to be heading south to civilization but the warmer weather was nice.

Restless at the Olga community dock on Orcas Island. We stayed here for several days while Donna participated in a water color class put on by Carol Buchanan at the local community hall. Since it was late September, no problem getting a spot at the dock with an eye on the weather for southerly’s. Pretty cool though.

Site of the painting class, the Olga Energetic Club which was started long ago by the wives of the local Strawberry Plant principals to get together for quilting other activities.

Our niece- Karrin- near her new dorm at Western Washington U. We stayed in the reciprocal slip at the Bellingham Yacht Club while she got settled. She’ll be on the water ski team and maybe the waterpolo club as well. Busy girl.

Karrin with her proud parents–Owen and my sister Lisa–aboard Restless in Bellingham.

A repeat win for John & Ann Bailey’s schooner Sir Isaac at the Wooden Boat Festival in Port Townsend. I was on foredeck, John likes to keep the bow weighted down.

We had time between cruising in Canada and heading back to Mexico to be the ugly duckling, the—gasp—power boat in the PMYC Labor day raft up in Blakely Harbor. Just tied my iPhone to a party balloon and got this great shot (actually Larry Witty’s drone)

Ahhh. Restless all snug in her boathouse after 5 months of running around the Salish Sea. 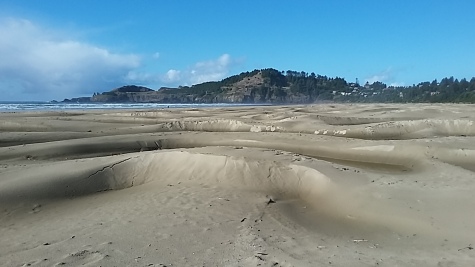 We spent a couple days at Newport to regroup after getting the boat put away and the van loaded for the trip to Mexico. This stretch of Agate beach used to be flat. Now it’s riddled with waterways and dunes. Very interesting. 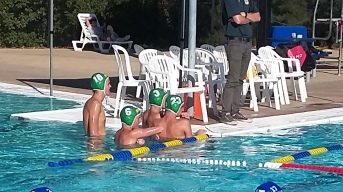 We made it from Newport to Sacramento in time to watch the 2nd half of our nephew Mason’s (#3) match at a local tournament.

The future home of Casablanca Tea House. Linda & Kristi are waiting on the building permit before construction can begin. Here with Kristi and her friend Jackie. Los Gatos may be as persnickety as Bainbridge on permits so could be a little wait.

My sister Linda and her daughter Kristi showed us around Los Gatos, the planned location for their Tea Shop. It’s quite the upscale community. Lucy, of course, fits right in. So, a little snooty but dog friendly–ok by us.