El Gallo harbor with Carmanah & Mabrouka anchored in the lee of the cliffs.

High tide (4′) at the Partida spit fish camp looking across at the anchorage .

We arrived on Sunday planning to find a dentist first thing Monday morning but they’re celebrating the 2nd revolution on Monday…. so 1st thing Tuesday then. Gave us time to repair our jib while it’s still calm. It got ripped in the middle of the night coming up here. Auto (the auto pilot) did a “crazy Ivan” which poked the spreader through the sail. Should have had Vanna the windvane steering. I definitly regret not bringing the fancy sailrite sewing machine along on the trip. Luckily our buddy Dave on Tranquility brought his and I was able to turn the dock into a sail loft. All better now.
Got to love Mexico. After checking for recommendations from the Club Cruceros (local sailors yacht club), I spoke directly to a dentist– Patricia Camon–at 9:30. At 11:00 I was in her chair with an endodontist on hand for a possible root canal. But as it turns out, 15 years ago I’d already had a root canal in that tooth (I forgot). They diagnosed a cyst which could likely be removed with oral surgery Yikes, this sounds bad. But by 5:00 I was back at her office with more extensive ex rays meeting with an oral surgeon. More antibiotics and surgery scheduled for Saturday. Estimated cost–$250 (US). Wow, I like the price but that didn’t help alleviate my reservations about getting a procedure this major done in Mexico. All kinds of things can go wrong.
The next day, the wind came in. Our marina had only a floating break water and the winds–up to 30 knots–had the boats bucking like rodeo bulls. I bought heavy rubber tubing to help absorb the shock. Still, hard to sleep aboard though. Being at anchor may have been better but those folks were pretty much confined to the boat for two days. The fact that it was 80 degrees air temp made it much more pleasant that a storm like this would have at home.
This town is very unlike the Los Cabos area. It’s a real town that isn’t set up to exploit tourists. Nobody trying to sell you stuff, no cruise ships, no “hey buddy, cuban cigars right here”, no inflated tourist prices. And, we loved the many restaurants. The people are genuinely friendly, not just trying to sell you something.
We had one last HaHa event on Thursday. A reunion party so past participants in the area were invited. Yay another party, take my mind off the upcoming surgury. It was a big dinner with local folk dancing followed by mariachis that were better that my memories of Herb Alpert. A local rock band capped the evening with great dance music. Fun!
Saturday, not so fun. Surgery day. Ouch, just a shot of nova-cane? I’m used to something more when they’re removing bone to reconstruct jaw. But I survived which is saying a lot given that I’m a total wimp in the pain department. Time will tell if it’s a success. I can’t do much during the next week, especially sneeze. If I sneeze I could blow out the new sinus membrane. How do you not sneeze? A quick google search revealed a list of anti sneeze techniques. Who knew? Armed with antibiotics, ibuprofen, lime popsicles, and anti sneezing techniques, we headed up to the Espiritu Santo islands for a week of wilderness exploring.
The first cove we anchored in, we immediately got a radio call from Roy on Mabrouka, also anchored in El Gallo bay, wanting to know if we belonged to the Port Madison Yacht Club. Yep, another Bainbridge Islander in Mexico. We did remember him from club cruises years ago. That night over dinner we noted the number of Bainbridge boats down here. Heck there were 4 on this year’s HaHa alone. A disproportionate number per capita for sure. I theorized that if all the Bainbridge boats returned home at once, there’d be a severe shortage of marina slips.
Further up the islands at Partida Cove we anchored with the “kid boats” from the HaHa including Agamere from Bainbridge Island. Boats with kids aboard tend to travel together to facilitate play dates, cooperative child minding, and social interaction. It works really well for them as far as I can see and many long term friendships develop. They invited us to their Thanksgiving potluck raft up on Thursday. Lucy would love all the kid attention. But with Hurricane Sandra heading our way, we’re going to head back to La Paz. She’s not supposed to get this far north (glad we didn’t fall off toward Mazatlan) but there will be some contrary winds felt up here and as luck would have it, I get my stitches out on Saturday so we want to get situated near the dental office incase things kick up in the interim.

Cactus John with some coral on this Es 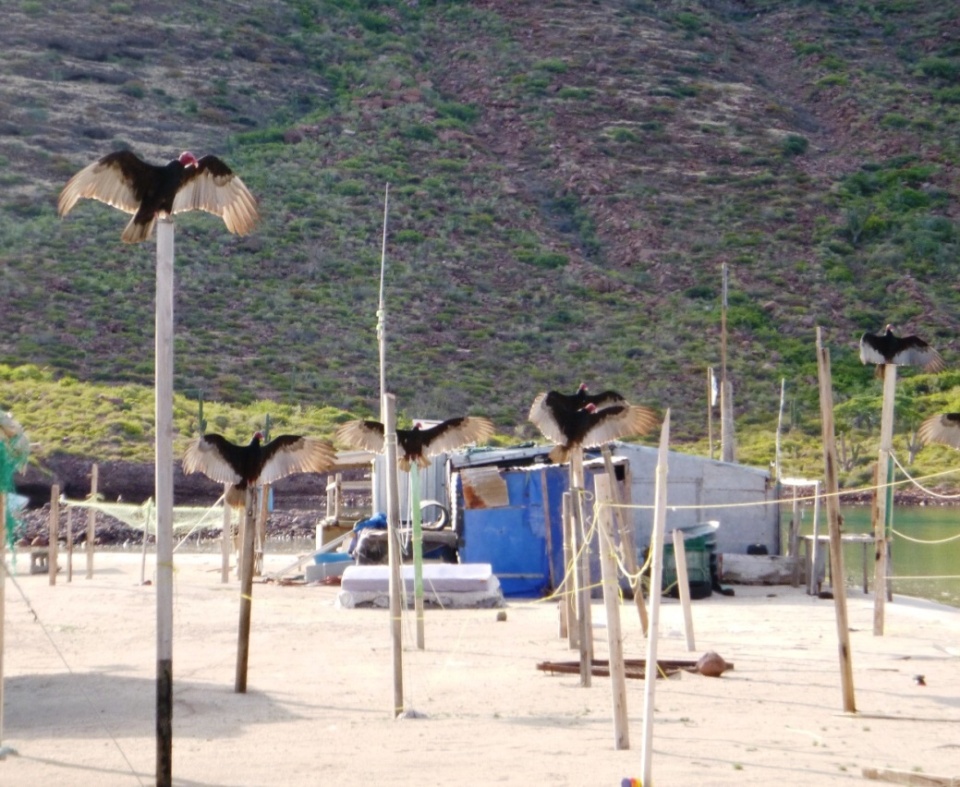 Vultures at this deserted fish camp drying their wings in the morning sun. They didn’t budge when we walked through even with our ferocious dog. 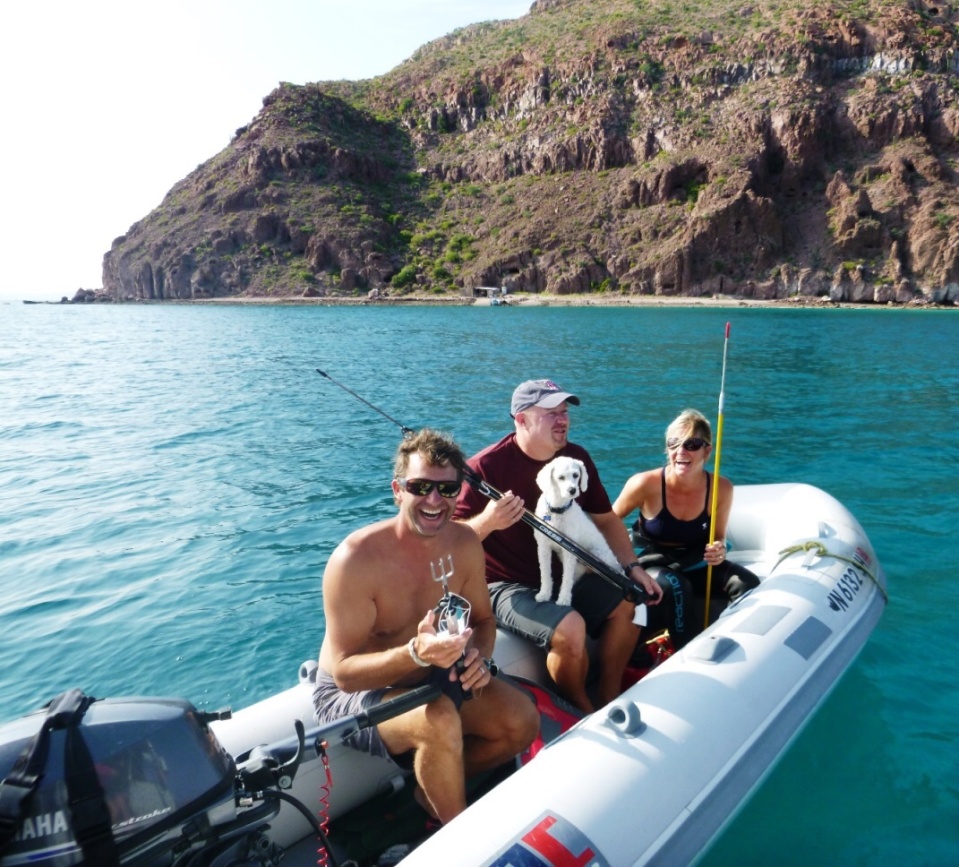 Lucy jumped in with the “hunting party” going spear fishing for big game at Isla Partida. Nick, Mogan, and Trever came back with a goat fish. 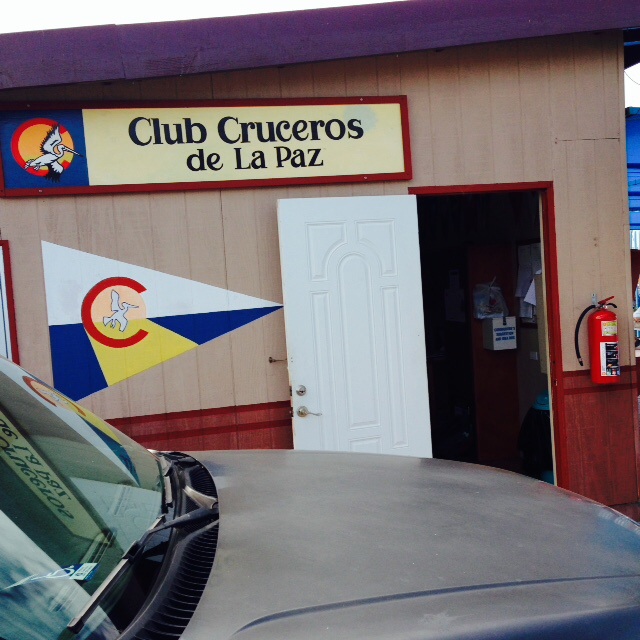 Our new local Yacht Club has a killer video library.