It’s the middle of October, we’re sitting here in Avalon Harbor and it’s hot (90s). Uncle Pete said it was 104 in Long Beach across the channel yesterday. Carmanah has all her awnings and shades up and we’re jumping in the water every half hour to stay cool. Cold beers between immersions a necessity more than a luxury. Yep, it pretty plain that we’re having a tough time down here. We’re calling it our training camp for Mexico and this is our “hell-week”. If we survive, we’ll move on to some more advanced training…perhaps involving margaritas.
Cousin Dan and his wife Nicki took the 60 minute ferry ride over here from their home in San Pedro to help us adjust to the heat. They of course said “this never happens here”.  We get a lot of that.

Actually, the cruising is way different down here compared to the NW. There are two options:  marinas inside breakwaters and open roadstead anchorages like in the Channel Islands. If you want to anchor out, you’re basically anchoring with at least one side exposed to the open ocean. Always wavy and beach landings almost always involve some surf unlike the NW with it’s multitudes of protected anchorages and destinations. Here there are very few destinations to sail to for the average boat owner. Luckily, most of the folks we’ve met love it here & don’t have any idea what they’re missing in the PNW– beyond the rain of course.  We try not to say anything.

The Channel Islands are mostly National Park or Nature Conservancy managed land. Dry and rugged like the desert, in the process of going back to their natural state. Our first stop at Smugglers Cove, Santa Cruz Island was typical-rustic cruising here. It blew 25 all afternoon/evening so no shore leave for Lucy. In the morning it was calm but the swell is always there. In short, Lucy got the ride of her life going ashore in the kayak–eyes like saucers. A couple more stops like Smugglers were similar. But our final stop in the islands, Avalon on Catalina Island, is an interesting contrast. It’s like a cross between Roche Harbor and what I’d imagine one of those old Mediterranean sea-front towns built up steep hill sides and fronting a quaint harbor to be like. Transportation is in golf carts, hundreds of them. The harbor is jam packed with mooring buoys–cheek to jowl. The ocean swell is still present but the moorings are very secure. We were going o skip it but are really glad we didn’t, It was a very cool experience especially since Dan & Nicki cancelled their Monterey getaway to come join us. Being locals, they really helped us focus on our training regime.

One weird thing we noticed in the shallow mooring areas around here are the snap, crackle and pop of brine shrimp.  I first noticed it at the Santa Barbara marina (the loudest so far), this crackling sound coming from the hull.  at first I though maybe the hull was delaminating or the micro balloon fairing compound was cracking off.  Very unnerving.  What a relief when I found out what was causing the noise, tiny shrimp.  Go figure.

Green Flash-where are you (we actually saw one the night before). Best part of Channel Islands Yacht Club was this beach right across the parking lot. 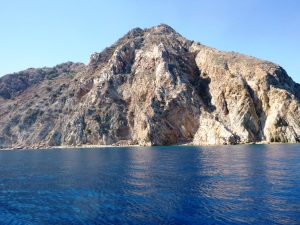 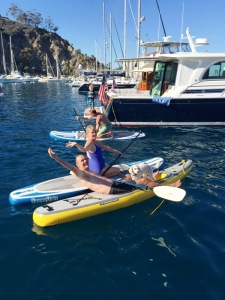 Best way to stay cool is to stay wet. Nicki was a real pro on the paddle board. 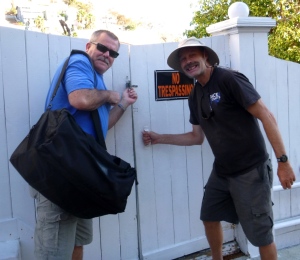 Cousin Dan and John looking for trouble in Avalon. 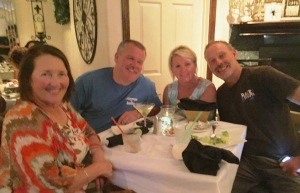 Donna, Dan, Nicki and John out to dinner. 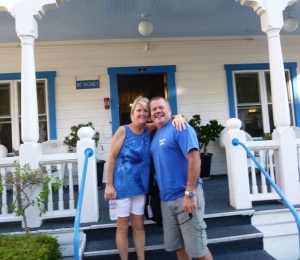 Nicki and Dan at the Santa Cruz inn, their room was quaint but no air conditioning. Ouch. 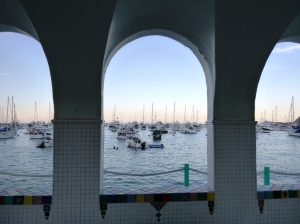