The problem with “weather windows” is that we’re always trying for calm seas but that also means too little wind when on a run. That was the case when we left Crescent City at 1:00 PM for an overnight passage around Cape Mendicino with plans to round the Cape at 2:00 AM, the calmest time. In the end, the seas were only 7 or 8 feet but we only got about 1 hour of sailing, the other 22 hours was spent motoring and rolling from gunnel to gunnel.
Oh well, we got here in good shape and well rested for exploring the exotic Fort Bragg. But first the crossing of the Noyo River bar. As with most of these bars, the entrance is about 2 feet wider than our boat and 2 feet deeper than our draft. There’s always a pucker factor. But once across—bam, it’s all calm and you’re heading up this winding river with wharves on either side–fish markets, boat yards, chandleries’, etc. Very cool. The marina is in the heart of all this. Almost all commercial fish boats. But here, they’re all friendly and don’t have an attitude about sail boats like many do. One of the boats named Princess operated by a couple of young women had no trouble attracting customers to buy their fresh albacore tuna which I of course couldn’t resist. Later I also got some fresh King salmon that we planked and ate with our new friends Mike & Linda of Tranquilo–that was the best.
We ended up “weathered in” for four days which was maybe more of an excuse than a reason because the day we finally left was really no better that the previous days but we just liked hanging out here. At $20 bucks a night, it was a bargain with free showers to boot.
The down town has a central district of 3 blocks by 3 blocks that is loaded with art galleries, restaurants, bars, and small shops that are cool but the best asset is the North Coast Brewing–right in there with live music 2 nights a week. They have a Hefeweizen that I reconfirmed many times as being really really good, Donna became hooked on the Scrimshaw Pilsner–much more enthusiastic than I usually see her get about beer.
Also, they have Dial a Ride. Just call on the cell phone and they take you anywhere for $3. I can’t believe we left so soon. This place is so fun. 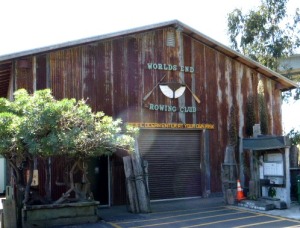 Worlds End Rowing Club, they row in the open pacific so not the sleek shells of BI rowing club, like the oarsman, these are stout, squat vessels. 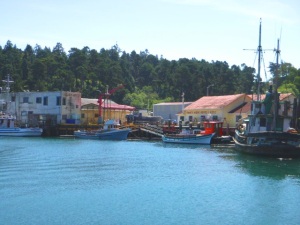 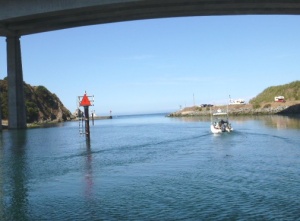 The Noyo Bar at Fort Bragg looks so placid today, not so when we left at 5:30 Sunday morning  in the pitch black with breaking waves on either side. 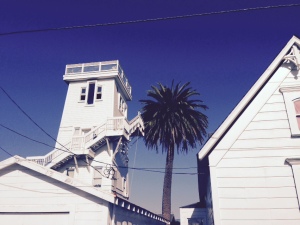 Our first palm tree on the trip south at the Fort Bragg town square. Yaah. It’s getting warmer. 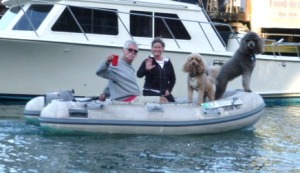 Mike and Linda of
Tranquillo with their darling dogs Fro & Furley were fun to hang with during our tenure at F.B. 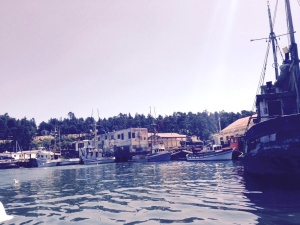 Wharves line either side of the Noyo River just past the bar–calm as can be. 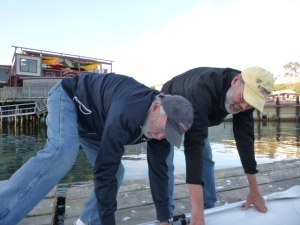 It’s not all fresh tuna and cold beers, here’s a couple of dudes hard at work–holding down the dinghy(?) 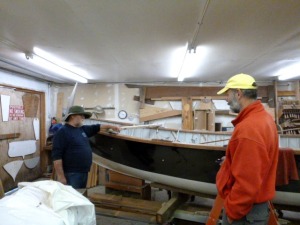 Master Boatwright, Dusty, shows us some of the projects at the End of the World shop.

2 thoughts on “Around the Dreaded Cape, Lovin Ft. Bragg”